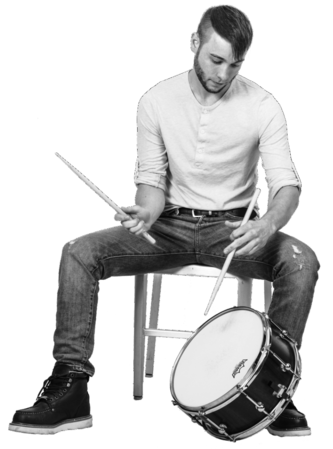 Michael Ohlinger is a virtuosic international percussionist, composer, recording artist, and educator based in the Los Angeles area. Michael is young, energetic, and talented, with an extremely diverse instrumental and musical pallet.

Michael received his Bachelors degree in Classical Percussion Performance from Towson University in Baltimore Maryland where he also focused on Jazz studies and Free Improvisation. During his senior year of undergraduate studies, Michael found an interest in world percussion instruments, music, and concepts. This newfound interest led him to obtain his Masters Degree in Percussion performance from The California Institute of the Arts where he dove into traditions of many different cultures.

Michael has recorded on the Composer Authenticated album, Michael Colgrass: Percussion Music 1951-1957. He was a top three finalist in both the Hank Levy Jazz Competition and the Tamburi Mundi International Hand Drum Competition, where his original compositions were showcased. He has performed in the Baltimore voted best band, Bosley, and in the “Music in Media” nominated group Maryama Band. Michael has been on two European tours and has had the pleasure to perform with the Baltimore Symphony Orchestra.

No matter the musical setting, be it Classical, Folk, Contemporary, Acoustic or Electric, delicate or ferocious, Michael has the dynamic range and adaptability to produce the highest level of art.